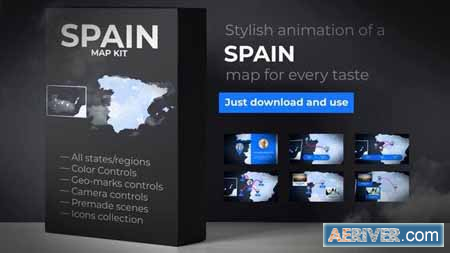 Hi This is the Spain Map Kit. It will add to your video a stylish animation of a Kingdom of Spain map for every taste.

The project contains absolutely all communities of the Spain.

In addition, each Spain communitie is configured individually.

Working with the template is easy, because the project contains 3 types of settings.

The first type of settings allows you to customize the colors of the map individually for your design.

The second type of settings adjust the position of geo-marks and routes on the map.

The third type of settings is to control camera movement over the map.

So you can come closer to any point with ease.

The template includes a collection of markers and images for maps.

So just download the template right now and add a map to your project.

This animation template is very helpful for cartography-themed promotional material. It can be used as is and customized to your taste. There are many colorful transitions and classic traveling scenes.
Spain (Spanish: Espana), officially the Kingdom of Spain (Spanish: Reino de Espana), is a country mostly located in Europe. Its continental European territory is situated on the Iberian Peninsula. Its territory also includes two archipelagoes: the Canary Islands off the coast of Africa, and the Balearic Islands in the Mediterranean Sea. Customization of 3d scenes is as simple as possible. You can also create your own global presentations and reuse them as many times you want.
A lot of Controls. Each of the presented scenes has its own map color controls.

Variable duration of each 2d slide from 3 to 300 seconds

Many placeholders for 3d photos or politic videos 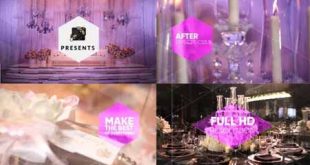